This is the title of the new Saxon Mozart Company’s cooperation project with the University of Jan Evangelista Purkyně in Ústí nad Labem and the Elementary Art School of T. G. Masaryk in Chomutov, financed by the European Union in the cooperation project Free State Saxony — the Czech Republic 2014-2020.

This support enabled in 2016-2018 the realization of the European Summer Philharmonic and Summer Choir project and also the content and area extension of the Saxon Mozart Festival, the Hubert’s Mass in Augustusburg and Klášterec nad Ohří, the choir music competition Jirkovský Písňovar. We can also extend the project idea of living advent calendar from Chemnitz and Zschopau to Ústí nad Labem and hold together Amadeus’ friendly party in occasion of Mozart’s birthday celebration.

This year we celebrate two anniversaries. The 100 Mozart’s Children project is looking back at ten years full of memories and the success of supporting over 100 children in their musical education. The string orchestra Ponticello, a friend of Mozart’s Children, has been around at the Elementary Arts School Chomutov for twenty years now. What else to celebrate, than friendship and anniversary?

This matinee in the Chemnitz Opera House is the introduction to several cross-border concerts and it shall also tune us for the Saxon Mozart Festival.

Mozart was a genius, no one can doubt that. And yet, this statement could be misleading. Nor Mozart nor his thoughts “fell from the sky”, they are the result of countless influences and trends. And after his death? He keeps leading new generations towards new interpretations, new variations and rebellious innovations through his pieces.

VARIATIONS — with this topic, the Saxon Mozart Festival is trying to have a new look at old pieces, it is looking into the context, posts numerous discoveries and shows the known in a brand new light.

May it be operas, “vest pocket format” symphonies, the famous wordless Requiem, jazz or modern Mozart: the Saxon Mozart Festival 2018 VARIATIONS will surprise and excite you and will make you move in the spirit of Mozart’s genius and music. 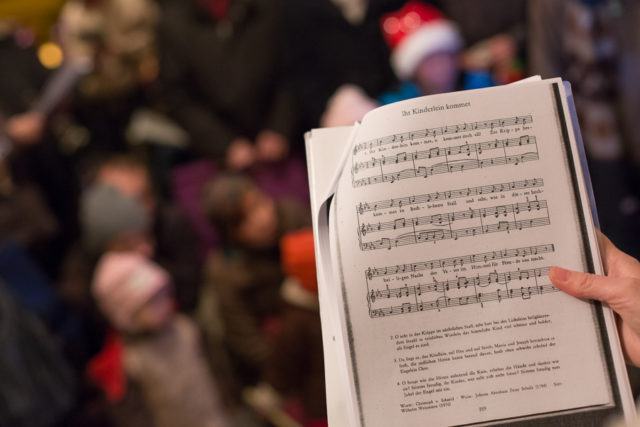 The exact times and “windows” are yet to be posted. You will find them on our website in December. 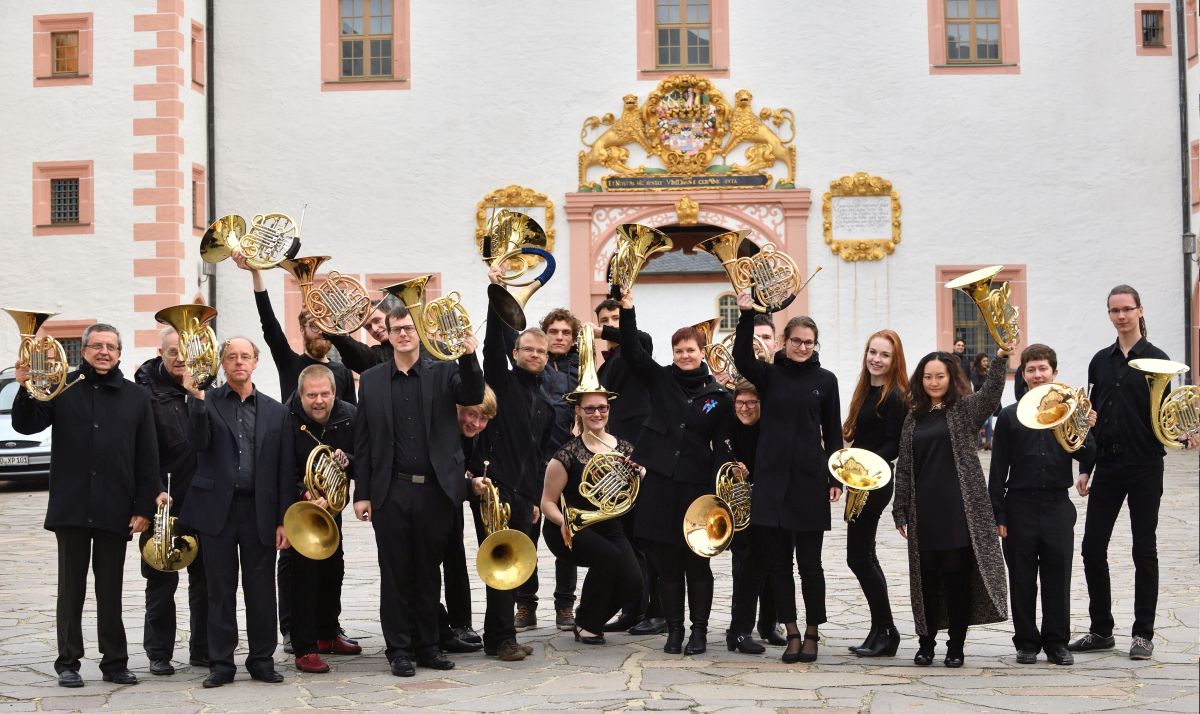 The french horns’ sounds call for the traditional Hubert’s Mass celebration, this year in the Augustusburg castle’s chateau church and the Emperor hall in the Museum of Ústí nad Labem. Let’s enjoy the concert and singing together! Let yourselves be spoiled by the venison menu and musical accompanying program in Augustusburg’s chateau restaurant. The concerts are preceded by a Czech and German workshop lead by prof. Thomas Hauschild and prof. Zdeněk Divoký. The workshop and concerts are supported by the European Union, European Regional Development Fund within the “Viva la musica — the culture in our partner towns Chemnitz — Ústí nad Labem and their regions” project. 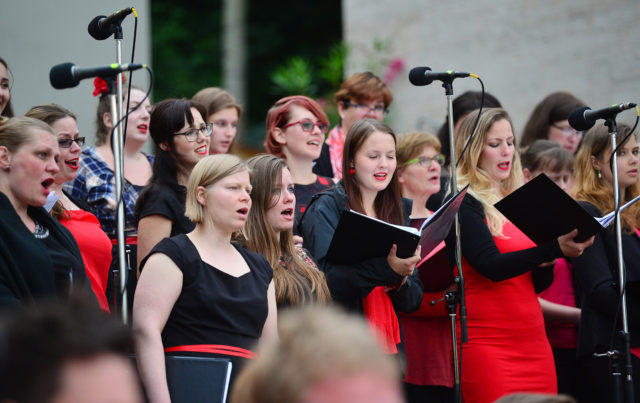 The symposium focuses on actual problematic of choir singing; workshops and the performance of the Music Department PF UJEP’s choirs are included.

A choir concert is being held on Monday 16. 10. in the Emperor hall in the Museum of Ústí nad Labem with a guest choir Unichor Chemnitz.

he international choir competition „Jirkovský Písňovar“ is organized by the choirmaster of the University of Jan Evangleista Purkyně in Ústí nad Labem, Luboš Hána. It is being held at the Červený Hrádek castle for the 11th time.

Be prepared for choir competitions, workshops, accompanying program and concerts.

The visit will pay off! 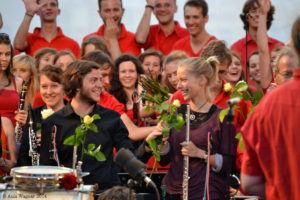 The Summer Philharmonic is a special project, which will excite both the performers and the audience as they share mutual effort for the most beautiful tone, get the musical message and feel joy thanks to playing together. This special situation, when you can reach seemingly impossible things, is magical and fascinating at the same time. This project enables the young and the old ones as well as the beginners and professionals to play together.

Only the basic costs are financed in this non-profit project — the most of the program is on a voluntary basis.

230 years have passed since Mozart’s celebrated opera premiere and the Saxon Mozart Festival is expanding to Central Europe. The 26. Saxon Mozart Festival called “Mozart and Bohemia” celebrates the creative and successful contact of the Salzburg’s genius and the musical region, which openly accepts and welcomes the whole Europe’s new progression.

Mozart’s work and performance and the Czech culture’s musical treasure, still partly unknown and waiting for someone to discover it, are the main topic of the Saxon Mozart Festival 2017.

Every year the Saxon Mozart Company e.V. holds a party to celebrate its patrons with refreshment and musical accompaniment, all the members, sponsors and friends are invited. The program is liven up by the performances of new scholars and great interprets like the Prague Nostic Quartet. Scholarships granting is also included.

One “window” opens every evening. The shops, institutions and households invite to spending time together — let’s celebrate Advent and spread Christmas mood by singing, story-telling, poetry, Christmas sweets, tea and mulled wine. The Saxon Mozart Company e.V. shared the thought of the Living Advent Calendar with its Czech friends for the first time last year thanks to the cooperation project “Viva la musica — the culture in our partner towns Chemnitz — Ústí nad Labem and their regions”.

The French horns’ sounds called for the traditional Hubert’s Mass celebration, held in the Augustusburg castle’s chateau church and in the castle in Klášterec nad Ohří. A refined venison menu and musical accompaniment awaited the visitors at Augustusburg.

Both concerts were preceded by preparatory Czech and German workshop lead by prof. Thomas Hauschild and prof. Zdeněk Divoký.

The international choir competition Jirkovský Písňovar, which was organized by the choirmaster of the Jan Evangelista Purkyně University in Ústí nad Labem, Luboš Hána, was being held at the Červený Hrádek castle for the 10th time in a row. The program consisted of choir competitions, workshops, accompanying program and concerts. The visit payed off! 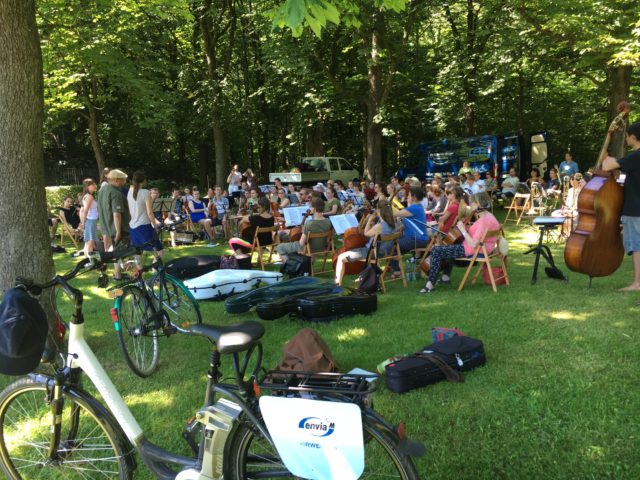 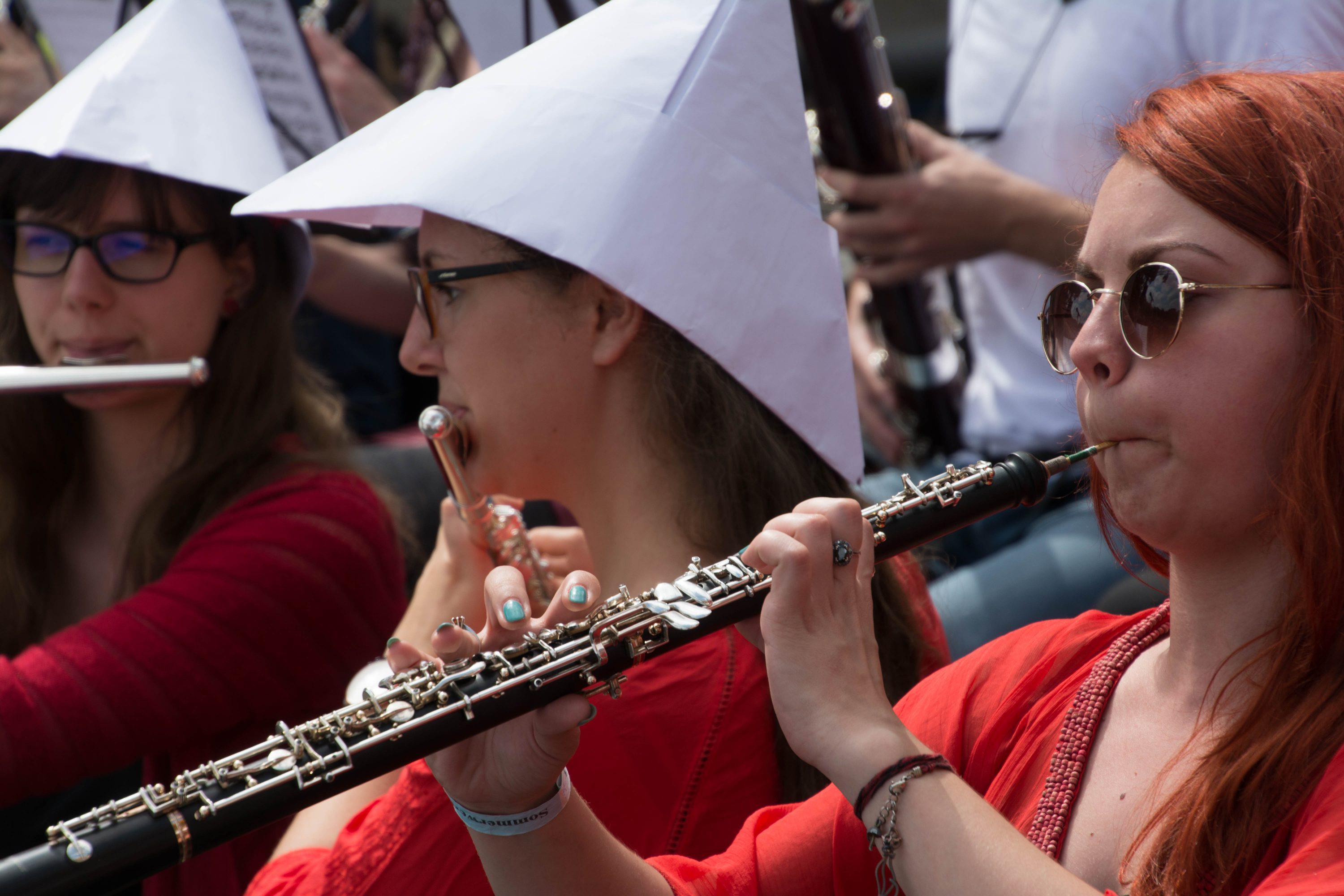 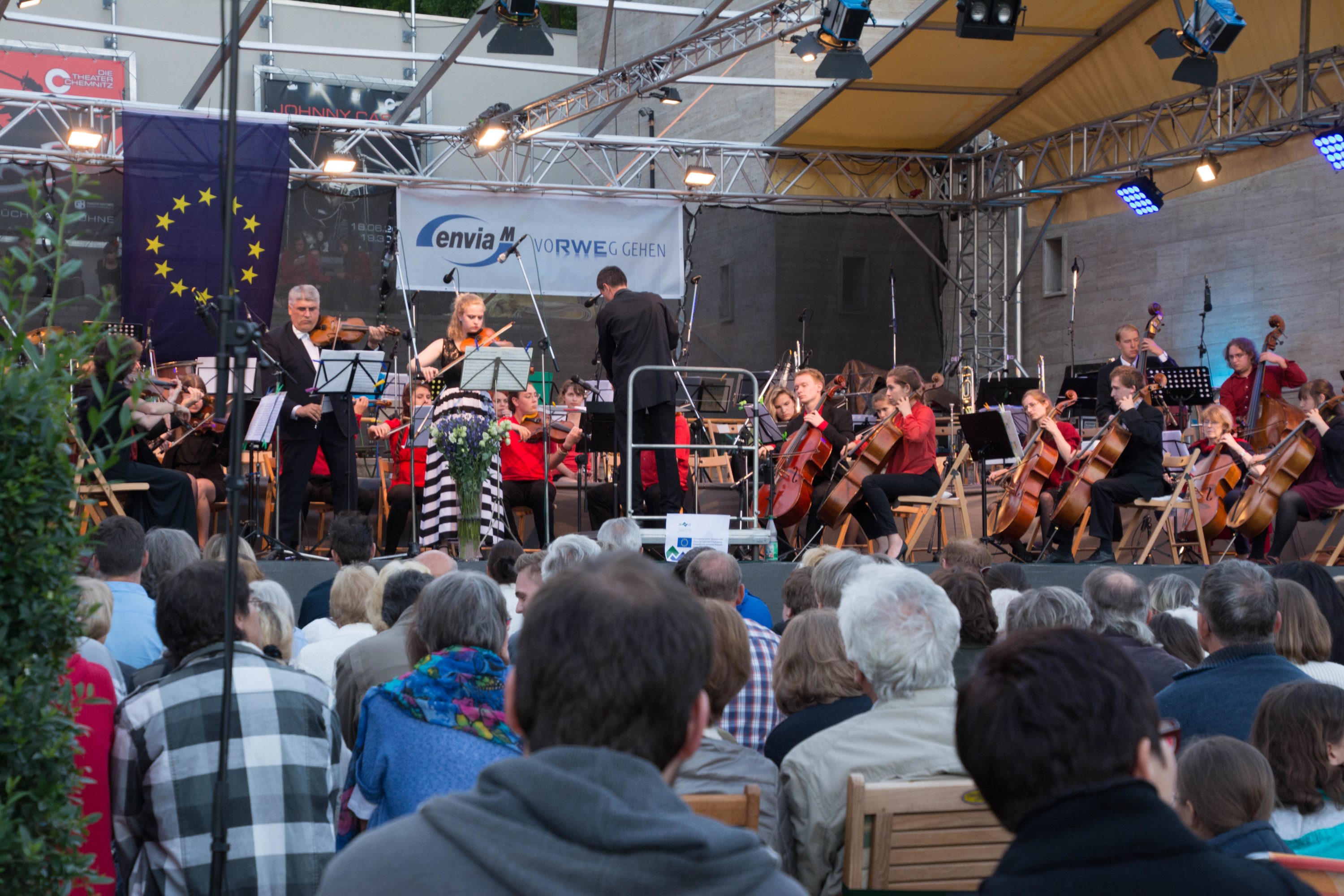 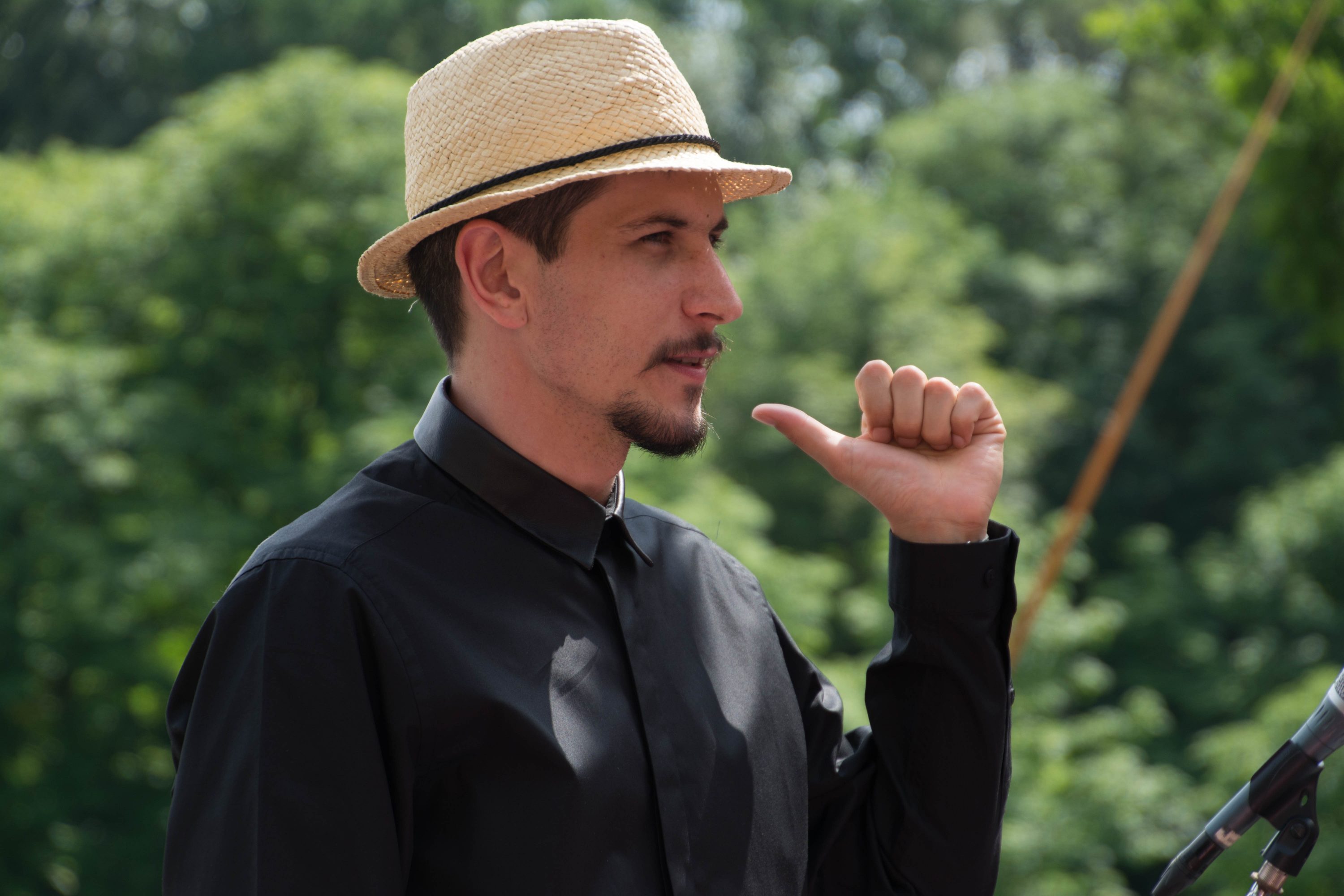 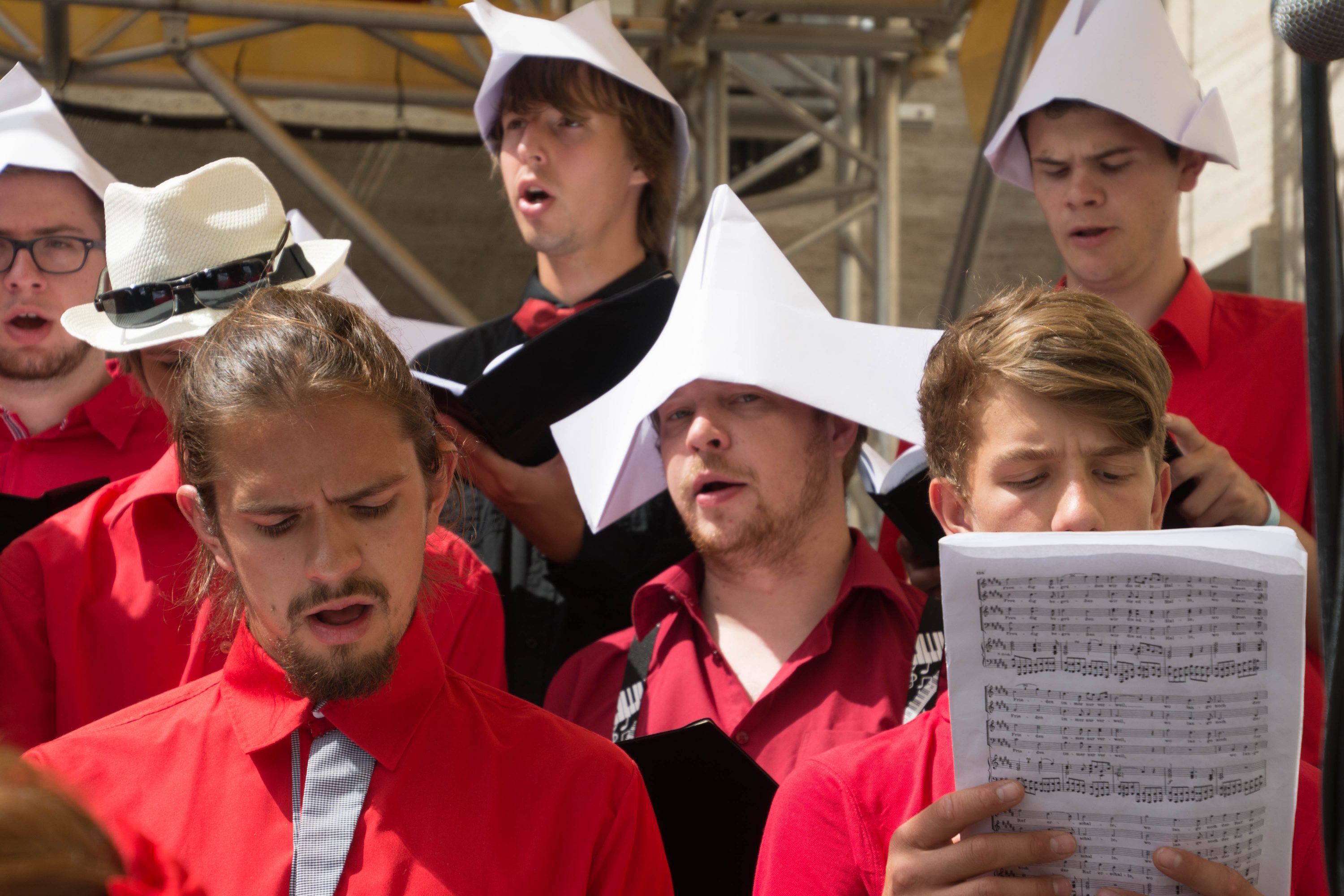 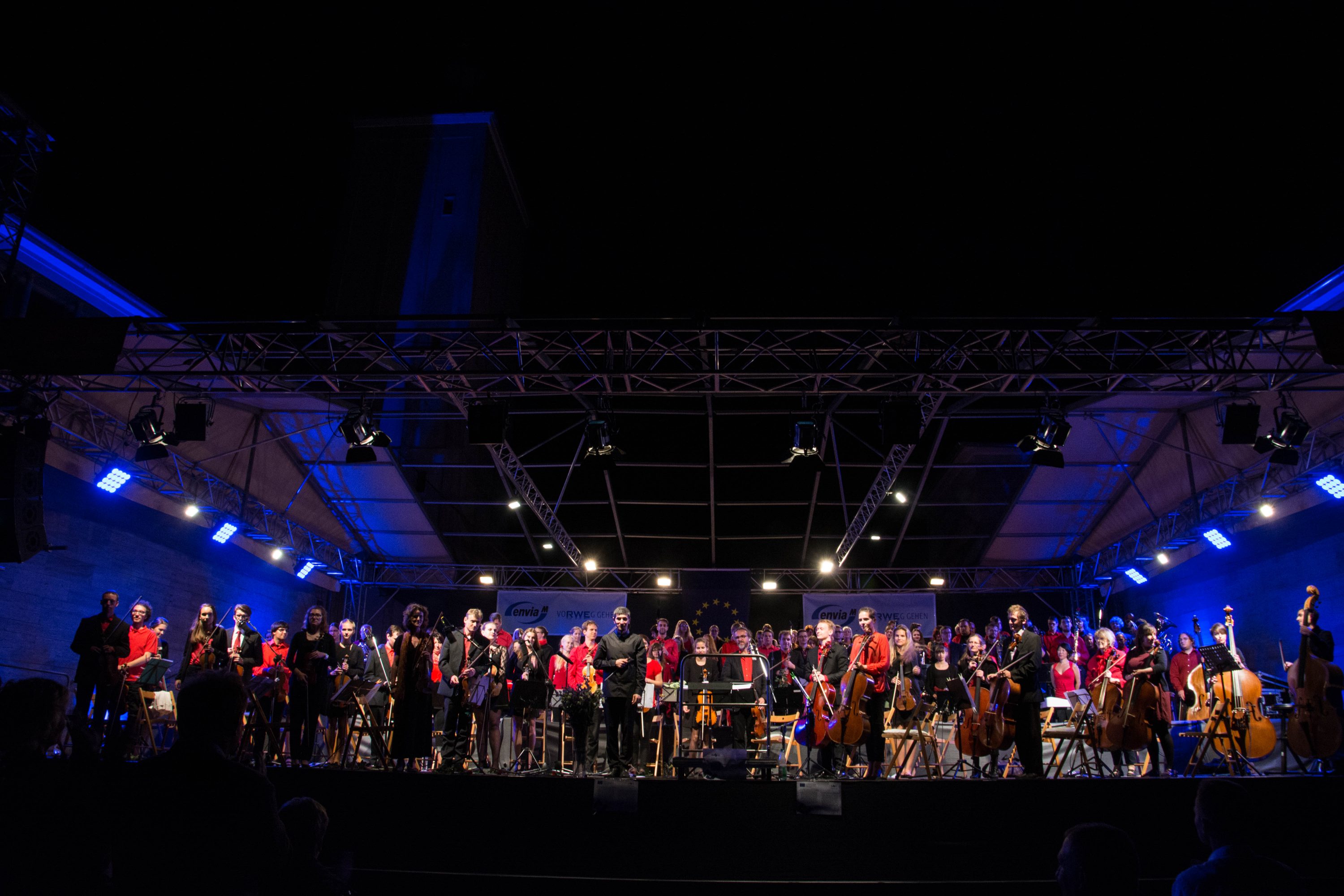 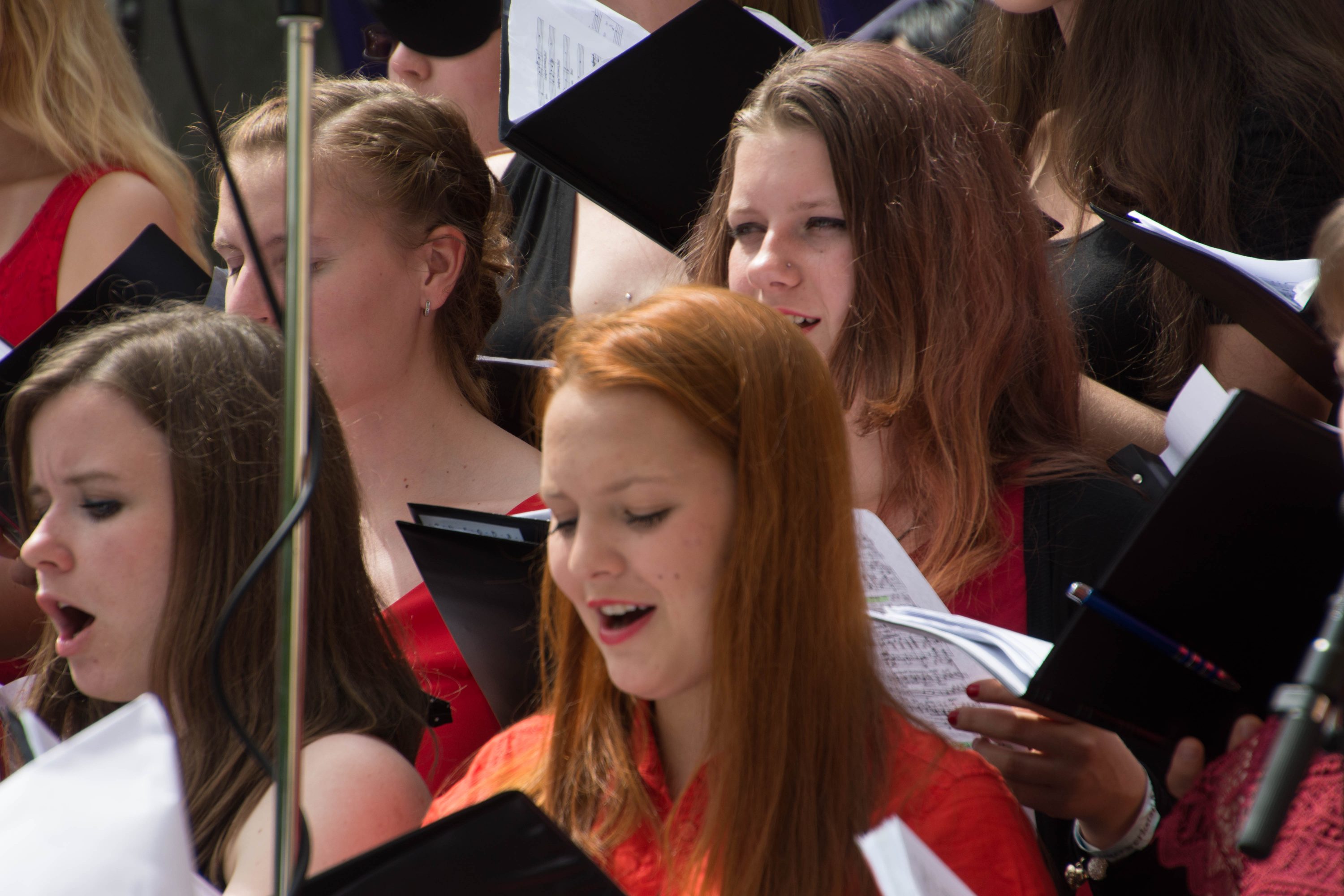 The Czech participation in the 25. Saxon Mozart Festival

The young musicians from the 100 Mozart’s Children project will perform together with the graduated and current students of the Elementary Art School Chomutov:

Ondřej Fedor (violin) is with his interpretation of Jules Massenet’s “Thais Meditation” the last Czech musician.

The Czech pupils are lead by Emi Suzuki, a Japanese pianist, who studied at the „Tokyo College of Music“ and the Prague Conservatory and is now a teacher at the Elementary Art School Chomutov.

The second part of the musical evening is being prepared by the students of the Music School Chemnitz. Their musical accompaniment will be the student of Emi Suzuki, Barbora Černá form the Elementary Art School Chomutov, who has prepared the piece of C. Debussy, Rêverie. Another musician who will introduce himself during the evening is Florian Patschinsky with his own piece “Unknown Land” and with F. Chopin’s “Nocturne”.

The Elementary Art School Chomutov and the Jan Evangelista Purkyně University in Ústí nad Labem are the partners of the Czech-German cooperation project Viva la musica, which is being financed by the European Union within the “Free state of Saxony and the Czech Republic 2014-2020” project.

The “Viva la musica” project will be started at the Saxon Mozart Festival, which begins on 13. May 2016 and has extended its area and content. Another projects like the European Summer Philharmonic and Summer Choir, Hubert’s Mass at the Augustusburg castle and in Klášterec nad Ohří, the choir competition “Jirkovský Písňovar”, Amadeus’ friendly get-together in occasion of his birthday might be also expanded in 2016-2018, and the Living Advent Calendar may expand from Chemnitz and Zschopau to Ústí nad Labem.

This year, the Saxon Mozart Company celebrates the 25th anniversary of the Mozart Festival — more than 25 concerts in 20 different localities in Saxony promise unusual musical encounters with renowned performers and pieces from baroque to the present. The date is set to 13.-29. 5. and the motto is “the Genius and Generations”.

The first weekend of the Saxon Mozart Festival is already full of music: the French violinist Gilles Apap is the soloist and conductor of the opening concert in Kreuzkirche in Chemnitz on 13th May. The pianist Peter Rösel will receive the 2016 Mozart’s Prize within this evening. The trumpeter Ludwig Güttler will pay attention to the generation of “Mozart’s fathers” during the concert on 14th May. The exhibition “Mozart in the Electorate of Saxony” will present the genius’ stay in Central Germany, the famous opera “Magic Flute” will be played on 15th May within the fascinating environment of the Mittweid hydraulic structure. Guest performances at the 25th Saxon Mozart Festival will be given by the Calmus Ensemble, the radio choir MDR Leipzig, the Klenke Quartett, the German-Serbian formation “Uwaga!”, the tenor Markus Schäfer and many brilliant chamber ensembles and soloists.

The arresting encounter with the young artists from Chomutov will take place on 27th May in the New Hall of the Music School Chemnitz. The pupils of the musical schools in Chemnitz and Chomutov will prepare a “Long Piano Night” (starts at 19:30) together after the recital of the Mozart’s Prize holder Peter Rösler. Vival la musica — the cooperation project of the Saxon Mozart Company (Sächsische Mozart-Gesellschaft e. V.) and the Jan Evangelista Purkyně University in Ústí nad Labem. The project, which goes beyond the borders, comes to life. The “Free State of Saxony-Czech Republic 2014-2020” cooperation project’s partners from Chemnitz and Ústí nad Labem met on Monday for the first time after the approval of financing by the European union… read more →

This website uses cookies to ensure the best experience on our website. The collected anonymous data allow us to improve our offer by using web analytics Read more